Jimmy grew up in Spencer Oklahoma, just outside of Oklahoma City. He has been in full time ministry since he was 22. Jimmy has always loved the outdoors but he didn’t start bow hunting until 2000. For several years he kept getting skunked but he stuck with it and eventually harvested his first buck with a bow in 2004. He was hooked so he put down the golf clubs and got real serious about bow hunting. He harvested several nice Oklahoma bucks with his largest Oklahoma buck grossing 172” in 2007.

Jimmy spent the first 15 years of his ministry leading Harrah Church in Harrah, Oklahoma. Jimmy had a lot of success reaching people that were turned off by a traditional church experience. He was very intentional about being relevant to the culture in order to connect faith with everyday life. One very unique aspect of His ministry in Oklahoma was a Bow Hunters Bible study that he developed. Every year the men 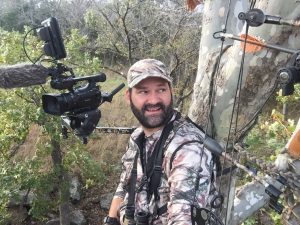 would reach out to bow hunters and Jimmy would teach hunting techniques along with faith lessons for four weeks. At the end of the study the men would go on a bow hunting retreat together. It was an awesome tool Jimmy used to show guys they could follow the Lord and still be a man!

In 2008 Jimmy was asked by Randal House Publishing to write a book about parenting and passing your faith down to your kids. His book Shelter was released in 2009.

Jimmy moved to Overland Park, Kansas (a suburb of Kansas City) to plant Overland Park Community Church in 2011. He now mainly hunts with his bow and he loves living in Kansas. In Jimmy’s own words, “Kansas is a bow hunter’s dream state!” Since moving to Kansas Jimmy has harvested four Pope and Young bucks. In 2013 Jimmy started self-filming his hunts. Jimmy harvested his first two mature bucks on film during the 2014 and 2015 seasons. In 2016 Tom Miranda added Jimmy to the Mathews Dominant Bucks Pro-staff and his first episode aired in June of 2016.

Jimmy loves the Lord, his family, and pursuing dominant bucks with his Mathews Bow and Canon XF400. To book Jimmy for a speaking engagement click here.